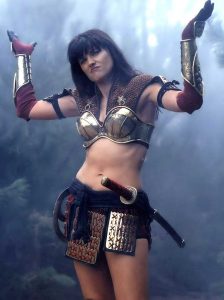 I watched Xena: Warrior Princess regularly.  I like the intricacies of Buffy the Vampire Slayer.  I thought Princess Leia was feisty & deserved more screen time.  For a while I wanted to be an FBI agent a la Dana Scully.

First of all, let’s acknowledge that the lines between science fiction & fantasy aren’t particularly well-defined.  I tend to embrace the term ‘speculative fiction’ for this reason.

Speculative fiction is ripe for the complex characters that I love reading or watching.  I like when women are portrayed as multi-dimensional, flawed beings.  I like when they are unapologetic about being strong and female.  & more often than not, they are fighting against the odds.  Speculative fiction lends itself to exploring gender role complexities within the safety of a different world or environment.  We can explore non-utopian worlds where we’ve overcome oppressions we experience day-to-day or experience futures and alternate realities that have gotten even scarier.

The kind of strong female characters I sought out should be more available in the mainstream.  Why?  It’s just media, you might point out…

Speculative fiction shows the path between theory and practice.

5 thoughts on “Why Seeing Women in Pop Culture is Important”