I’ve known my friend Kathleen since Grade Seven.  Best friends for a few really tough years in being early teenagers.  We still share many things in common, even though we haven’t lived in the same city for over 10 years.

Maybe there is something about getting through those tough years together that bonds us.  A “You’ve-seen-me-when-I-was-unsure-&-awkward-and-thirteen-&-still-was-my-friend” thing.

Regardless, this is a post about the ever present life lesson that it is never too late.

Example:  Kathleen took dance forever.  Well, not ‘forever’ but since she was teensy.  But at some point, life & academic came a-calling & it was less at the forefront of her life.  But now – many years & even more recreational dance classes later, I got a thrilling email from the West Coast reporting her purchase of her first pair of pointe shoes! 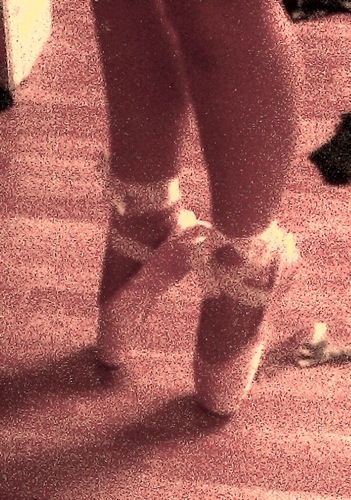 & why not?  So often people give up those little things that were once their BIG goal.  We don’t do it intentionally.  Other focuses pop up or we drop you of activities because we are way too busy or discouraged or…

It often isn’t until years later where we realize, “OH.  I still can’t do that.”  & funny enough – it seems like they are usually things that don’t “matter” in mainstream life’s list of priorities.  Your boss won’t turn you down for a raise because you can’t do a handstand.

That doesn’t mean you should stand in your own way of doing those little things, that little aching for something else.  Take a deep breath & the plunge of the first little step towards something new for yourself.  You deserve it.

One thought on “It is never too late.”